A History of the Street Names of Holly Hills

First appeared in the Arcadia Heights subdivision of 1913. The name began to be popular after British troops fought at the Battle of Alma, a river in the Crimea, in 1854.

Gus Arendes was one of the three developers of the neighborhood.

Named after Frederick Bates, the second governor of Missouri.

Named for Louis St. Ange de Bellerive, a commandant from Illinois. He governed the village of St. Louis before the arrival of the first Spanish governor.

In 1909 the Burgen Place subdivision was named from the Burgenland province in eastern Austria.

The park was named after the village of Carondelet. The village was named in 1794 by Clement DeLore in honor of Baron Francois Louis Hector de Carondelet, Governor General of the Spanish-Louisiana Province.

The private Concordia Heights subdivision of 1910 which was named for the nearby Concordia Cemetery. Concordia was the ancient Roman goddess of harmony or peace.

The three developers of Holly Hills, Federer, Livingston and Arendes, made plans at the Coronado hotel, and named one of the streets in its honor.

Named for Admiral George Dewey, a hero of the Spanish American war.

One of the developers was originally from Delaware, and named two streets after Delaware cities: Dover and Wilmington.

William Federer was one of the three developers of the neighborhood.

Hiriam Leffingwell, one of the original Forest Park founders, envisioned a broad boulevard stretching from the Mississippi River north of the city to the river south of the city. When he couldn’t get buy-in on his desire to name it Lindell Boulevard, due to its proximity to Peter and Jesse Lindell’s property, he settled on calling it “grand boulevard.”

Originally named after Edward Haren, a landowner and banker, a street sign was printed wrong and never fixed. The street has ever since been known as Haven.

Named after the neighborhood, which in turn was named after Hollywood.

Named after the Iron Mountain Railroad.

First appeared in the Leona Place subdivision of 1923.

Donald Livingston was one of the three developers of the neighborhood.

Marwinette is a composite name of the wives of the three developers of Holly Hills: MARie Federer, WINifred Livingston and JeanETTE Arendes.

Morganford Road originally led to a ford on the River Des Peres owned by James Morgan. “Morgan’s Ford” was eventually shortened to Morganford.

Named after an original subdivision from 1908.

Possibly named after an original subdivision named Rosa Park, or it may be named after Rosa Weil.

Named for a subdivision developer in 1922.

Named after a region in Austria because it was originally in a subdivision called Austria Heights.

One of the developers was originally from Delaware, and named two streets after Delaware cities: Dover and Wilmington.

Sources for the history of the streets of Holly Hills: 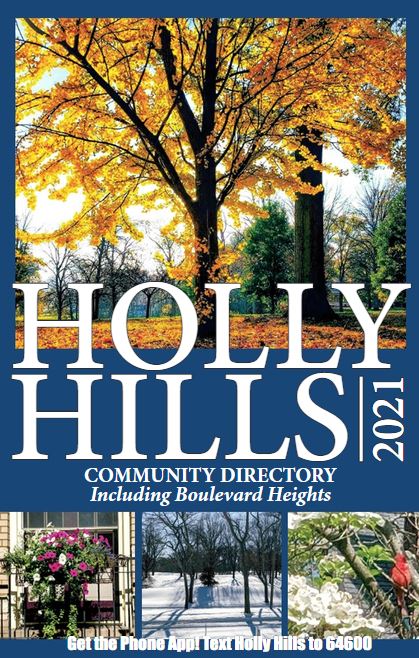